In Jamaica - James and Other Sproules

There were two ‘reputed’ children named in the Will of James Sproule of Jamaica and Mellmount in 1840, and I was determined to track them down.*  I was hunting for possible ‘Sproule’ slaves in Jamaica and it proved to be more productive than I had anticipated!

The Arrival in Jamaica

I learnt that the young James Sproule had arrived in Jamaica in 1801. The journey from Urney, County Tyrone, would have taken two months or more, and for James, this meant he arrived just a little too late.

James had been invited to join his rich and successful cousin, Andrew Sproule of Arnotto Bay in Jamaica. Unfortunately, while James was actually making the journey, Cousin Andrew had died.1  Andrew Sproule was obviously not aware that James was en route when he wrote his Will in August 1801, as he had  left £50 a year  to James 'should he come' to Jamaica. The bulk of Andrew’s  wealth and property was supposed to be sold within three weeks of his death and the money distributed  to friends and family in Ireland. However, this did not happen, as Andrew’s  friends and Executors in Jamaica were quick to confiscate most of the money.2

James Sproule arrived in 1801 to the news of Andrew’s death,  and he found that he had no claim to his cousin's fortune.

Slaves in Jamaica – From Ireland and Africa

James was now in a Jamaica run by rich and powerful landowners who made their money from producing sugar cane. Working with sugar cane was heavy labour, made more so by the the hot, humid conditions in Jamaica. The solution for these landowners was slaves, cheaply acquired labour run at minimum cost. I was surprised to find that the first slaves had come from Ireland – men, woman and children shipped by Cromwell’s forces to Cromwell’s captured islands in the Caribbean.


The slaves from Africa came later, and by 1800 there were over 250,000 slaves of African origin working in Jamaica. A bit like the Nazis, the landowners kept meticulous records, tracking each slave as he or she was bought, sold or died.  Amazingly, many slaves were also baptized. There are records of mass baptisms of 50 or 60 slaves at a time in each plantation, and again the names were recorded.

Was it possible, then, to find the ‘reputed’ children of James Sproule that had been named in his Will of 1840? James was a plantation owner in the Parish of St Thomas in the East. I found him recorded in the annual Jamaican Almanac every year from 1816 until his death in 1840.3  For example,  in 1816 James Sproule is recorded as having 23 slaves and five stock, indicating that his property, Rosemount, was quite small. (I was to find later that James was involved in other plantations.)

In 1817 there was a ‘registering’ of the slaves in St Thomas in the East. The land owner could actually get a bounty for each slave so every slave’s name in every plantation was recorded. This gave me the names of James’ slaves in his Rosemount Plantation.4  Were there any ‘Sproule’ names among the 23 slaves of James Sproule? Oh, yes, indeed there were!

I looked at the original documents. All of the slaves with Sproule names on his plantation were aged between 25 and 35 years old, too old to be the children of James. Equally, they were recorded as ‘negro, African’. This meant the poor folk had come directly from Africa, as opposed to ‘creole’ which was the term at the time for those born in Jamaica. These were not the children of James Sproule. They were recently acquired slaves from Africa and James was giving  them new names. He used names that were familiar to him, like Sproule, Caldwell and Sinclair. 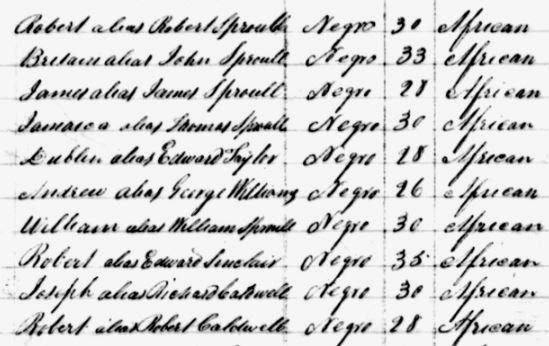 I needed to find ‘creole’ Sproules, those born in Jamaica. They also needed to be mixed race,  to be ‘mulatto’ or ‘quadroon’ rather than ‘negro’ . I had not found my cousins Jane and Eleanor Sproule, reputed children of James Sproule, on his Rosemount plantation.  In fact, there were only African slaves on Rosemount, no mixed race children at all.


* Episode 1 of this story The Beginning of the BIG Story


* NEXT Episode -  The Sproule Children of Stokes Hall Jamaica

1 From a letter written 12th October 1802 by Samuel Sproule of Bridgehill to Robert Sproule his Uncle who was in in Newbury South Carolina at that time. Thanks again Tim Hayes!
2 From the document ‘Charitable donations and bequests, Andrew Sproule’ , Public Record Office for Northern Ireland FIN/18/2/356
3 Almanacs of Jamaica, Jamaicafamilysearch.com
4  Slave Registers of former British Colonial Dependencies, 1812-1834 Ancestry.com Class: T71; Piece: 145